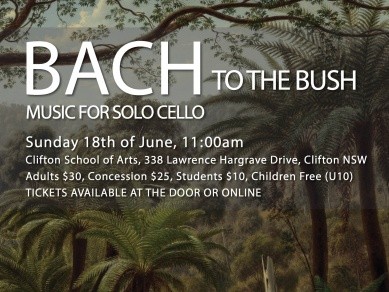 ‘Bach to the Bush’ is an ongoing concert series by Novocastrian cellist Anthony Albrecht. An outstanding young musician of international renown, Anthony is a recent graduate of The Juilliard School’s prestigious Historical Performance program which he attended on full scholarship, and is currently based in London as a Guildhall School of Music and Drama Research Scholar. Anthony returns to Australia regularly for performances with Pinchgut Opera and the Australian Haydn Ensemble, and has recorded for ABC Classics and VIA Records (New York City).

In these two-hour concerts selections from J.S. Bach’s stunning suites for solo cello are interspersed with other short, early works for the instrument and discussion of the historical and cultural context of this timeless music.

Morning tea, served by Clifton School of Arts members, will be on sale during interval.

Tickets are available at the door or online at  https://anthonyalbrecht.yapsody.com/event/index/63542